BEWARE OF PRODUCTS BY STEVE CLAYTON OR AIDAN BOOTH 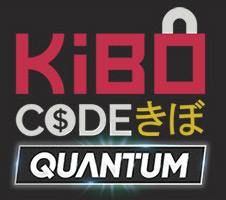 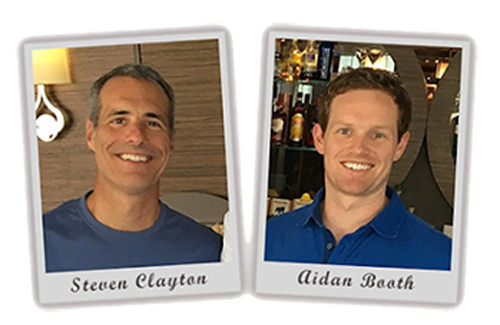 THE FOLLOWING IS A VERY DETAILED ACCOUNT OF MY EXPERIENCE AFTER PURCHASING THE HIGH-TICKET TRAINING PROGRAM "TRINITY CODE" FROM AIDAN & STEVE. For a summary-type version of this review, please visit here.

I purchased such a high-ticket course from Aidan & Steve called Trinity Code.

It was an online program with training & tools to make money online, as shown below. 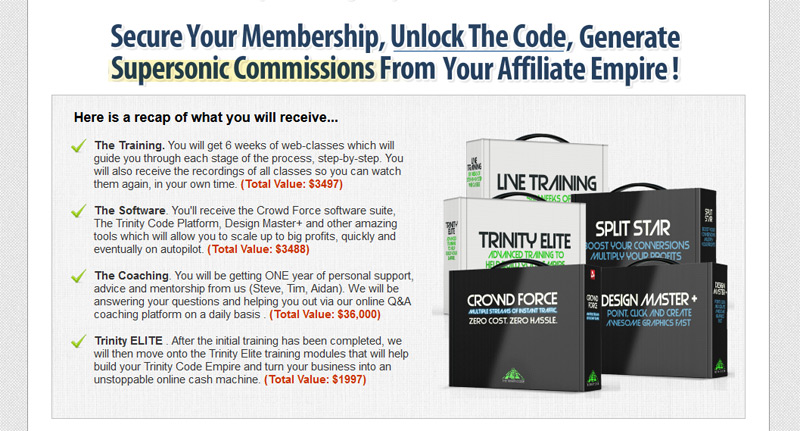 PRE-SALES ADVERTISING OF THE HIGH-TICKET PROGRAM BY AIDAN & STEVE

Most intriguing for me was the 'make $1k per month with each website' claim that was a cornerstone of Aidan & Steve's sales pitch.

With my technical background, it seemed quite feasible and easy enough: create a simple "thin" website, promote an affiliate product on it, and make $1,000 a month. Drive traffic to the website with the included software, so no fooling around with paid traffic.

Technically there wasn't much to it. I'd have no problem cranking out a bunch of these websites. Thousands of dollars a month in revenue awaited, according to Aidan & Steve's pitch.

So I diligently went through the entire training course. And implemented everything as instructed.

What was the result?

That's what I aim to explain in painstaking detail right on this here page!

One way I'd summarize Trinity Code - Aidan & Steve's high-ticket, make-money-online program - is that it's more psychology than substance.

What I mean by that is, Trinity Code is more about Aidan & Steve's ability to use psychology on YOU to make you buy Trinity Code. And it's less about you getting anything of value out of Trinity Code.

One reason I pulled the trigger and shelled out the big bucks was that Trinity Code was promoted by Gauher Chaudhry.

Gauher is an internet marketing legend. His blessing on Trinity Code helped immensely to make the sale.

Well, about all I can say is, you win some... And you lose the rest.

This was one in the loss column.

It was a mis-judgement (of trust especially) on my part. 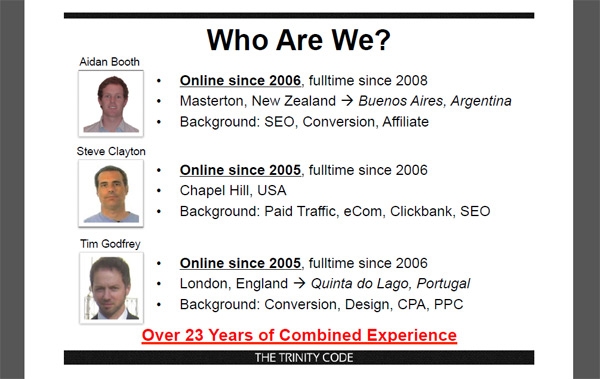 THE FACES BEHIND THE HIGH-TICKET TRINITY CODE PROGRAM


How the heck did I come to 'meet' Aidan & Steve? Such that I'd give 'em a pile of money like that?

Well, I had heard of Steve Clayton maybe 2 years earlier when he was selling some software thing, that was about it. Whatever the product, I remember it looked interesting.

With Aidan, I had more familiarity. Aidan and I once actually took an online-marketing course together. It was on fellow-marketer Brian Johnson's offering in the early 2010's. So I certainly remember Aidan from times past.

Add Gauher's blessing, and that was enough credibility for me.

That was a BIG mistake. It cost me over $3,000 and many, MANY hours of lost time, not to mention stress, anger, and the rest of it.

I've gone over probably 2-3 dozen different online internet-marketing programs in my 10+ years at this.

I've seen it all. Some good. Some bad. Some ugly.

Aidan & Steve's high-ticket product Trinity Code was BUTT UGLY -- for me anyway (which is all that really matters for anybody - what's in it for THEM).

If Steve & Aidan want to claim to me that others were successful with this program, my reply is simple: I don't care. I don't care about 3rd parties. I only care about you and me and our relationship. That's human nature.


Aidan & Steve often touted the so-called Elite portion of the program This was going to be like the high-end advanced mega-training bonus for those who 'stick thru' (thru the money-back trial period, that is).

To get people to stick around for Elite and not request a refund beforehand, Aidan & Steve used the psychology trick of FOMO (fear of missing out).

Stick around til the end and we'll reward you (with a piece of crap).

That was one of the top psychology tricks Aidan & Steve used.

Entice people away from seeking a refund by releasing "Elite" after the refund trial-period ends, while hyping it up & promising great things for Elite.

Got to hand it to Aidan & Steve - it was a good use of psychology tactics - dangling that carrot in front of you.

Giving up the right to a refund turned out to be far less valuable than sticking around for "Elite".

The Elite training bonus consisted of the following...

That's it. No kidding.


One video showed the Microsoft Bing Ads interface. It spoke in very general terms about buying paid traffic. The content of the video was obviously aimed at a newbie who never heard of the concept of paid traffic before.

For you newbies out there, trying to make paid traffic profitable takes LOTS of experience, and LOTS of moolah for testing (will lose a lot in the beginning too).

Elite bonus training gave no details whatsoever on HOW to do paid traffic.

They told you about the WHAT, not the HOW.

To me, Elite was totally useless.

I had already done thousands of dollars in paid traffic when I first started affiliate marketing 3 years prior to Trinity Code.

So this Elite part of Trinity Code was an Elite sham - a lure to get you past the 30-day trial period, and nothing much more.

It, like many of the components of Trinity Code, provided absolutely no value. Zero. Nada.


This section of the review will only grow bigger over time as I find the time to comb through the mountain of notes and files on this topic: BROKEN PROMISES. Lots of them.

One BIG promise broken was the whole "we'll drag you to success" rhetoric.

My experience... about as opposite as it gets.

Dealing with Aidan & Steve was a disaster for me.

I'm not trying to bash on anybody (just trying to be honest)... But when you fork out $3k for something, you expect it to be at least halfway decent.

Instead, here's an example of what I got... 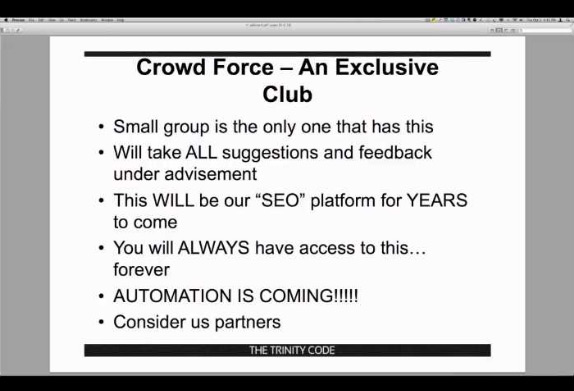 SLIDE FROM ONE OF THE WEEKLY LIVE TRAINING SESSIONS


The most important software tool in the entire program was Crowd Force, as it was gonna get all the traffic you'd ever need for your affiliate websites.

One time when Crowd Force deleted dozens of 'opportunities' I stored after several hours of work, I was not a happy camper.

So I wrote to Aidan & Steve's customer support to report the bug I found which erases your work.

Granted, I didn't use the most relaxed tone in my email when i described how i just lost lots of work (and time).

But my tone wasn't overboard either.

It just reflected my mood - unhappy.

Well in any event, I received no reply.

And this 'no reply' treatment became the norm.

The funny part is, you don't even need Crowd Force. You can find traffic 'opportunities' yourself. Crowd Force may automate things a little bit (MAYBE), but the tradeoffs between things like price vs. time saved is nowhere near good value.

So the "dragging" part to get us to success was nowhere to be seen, despite the hype.

Another promise made that went bust was in regards to not market to us, that is, the buyers of the high-ticket Trinity Code product.

In our Member's Area, we eventually were greeted front-and-center with a great offer where we could part with more of our money and get something really really swell. See below. 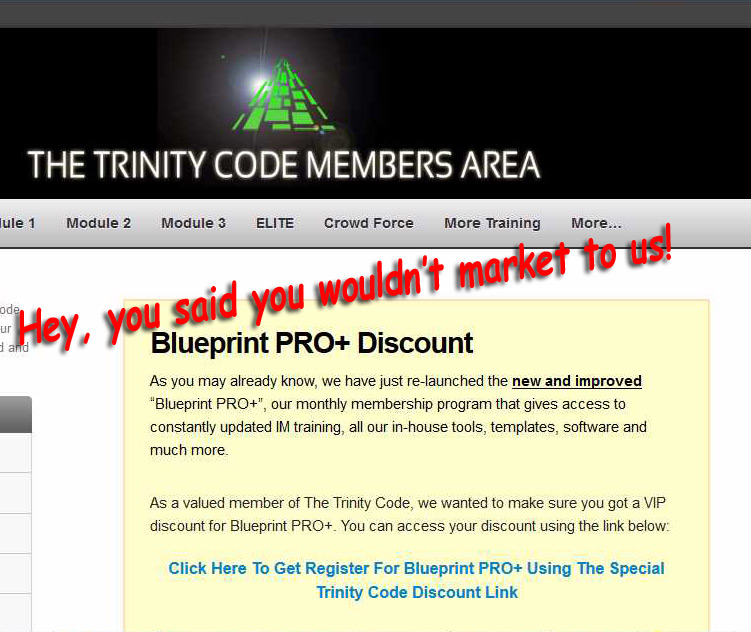 There was also email marketing.


I had several occasions where I needed to use the services of Aidan & Steve's Customer Support department for their high-ticket program..

As mentioned earlier, I had an issue where I found a bug in the main software Crowd Force.

I reported the bug because it was serious -- it could erase ALL your stored work at any moment!

But they didn't even acknowledge the fact that I found a big bug.

There was no thank you. There was no "we'll get right on it and fix this" sort of thing. No, there was none of that.

Instead I was ignored, as were all my email inquiries henceforth.

So much for the "amazing" support. Or the "we'll carry you on our back to success"

Were they offended by my unhappy email explaining that their prized software just erased a half day's work?

Was I then branded some kind of agitator and placed on a black-list?

Early on (before I was de facto blacklisted) I sent an email to Customer Support because I didn't receive all the bonuses that were mentioned in the sales video for this $3,000 product I just purchased.

Aidan himself wrote back that he'd look into it.

Aidan never got back to me like he said he would. I never heard back on the matter from anyone at their company.

This was before I ever hinted at any unhappiness with the program, so there was no animosity involved. Yet, no reply.

After completing the final portion of the program - "Elite" - I invested additional time in trying to make Aidan & Steve's system work.

My thoughtful, detailed email was not answered by anyone at Steve and Aidan's company.

That was the last straw for me.

Not only was I fed up with getting NO SUPPORT when I really needed it now more than ever, but I was also fed up with the low quality of the overall program and things not working anywhere as first described. So I asked for a refund.

Even though the trial period had expired for the money-back-guarantee, I laid out my case as to why I deserved a refund.

I explained point-by-point how the product bordered on being a bill-of-goods.

But alas, my request was met with no reply. Just like my emails before it.

Nothing I said mattered. The same pattern continued: Silent treatment.


I think a more appropriate name for this product by Steve & Aidan would have been NEWBIE TRAPPER. Or something like that.

And I believe a more fair price range for a product like this would have been somewhere south of $100.

Looking back, the product was indeed aimed at newbies. Even though I wasn't a newbie at the time, I fell for it anyway (the power of psychology tactics).

I fell for the '$1k/month per website created' lure the most.

Trinity Code, Crowd Force, the rest of it - none of it worked for me. And I DEFINITELY put in the necessary amount of elbow grease. So that wasn't the issue.

It was a woeful experience with Aidan & Steve unfortunately.

They were more smooth talk than smooth running system. .

My advice - if you ever come across any product or service being offered by Aidan & Steve, hide your wallet and run for the hills partner, 'cause they's lookin' to poach ya!